After two years of prototype development and testing, Videowindow – a company from the high tech incubator Yes!Delft – has inked a deal to give Rotterdam The Hague Airport an artistic and high-tech upgrade in an unusual area: the windows. More specifically, the airport has agreed to test and validate the start-up’s system for glare control in its terminal.

Videowindow is definitely not your typical high tech start-up. The founders aren’t engineers, nor do they have a background in science and technology. No, this two-man team consists of the CEO and cofounder, Remco Veenbrink, who is an artist, and CFO and cofounder, Mark Oudenhoven, who is an economist.

Jokingly referred to as ‘shading as a service’ or a SAAS-solution by Veenbrink, the Videowindow system offers glare control by using embedded media functions. In other words, it’s not blinds or shades that control the penetrating light, rather, it’s the video content itself that blocks the solar rays while streaming content directly on the windows – essentially converting ordinary windows into functional, transparent video screens.

Through this vehicle, previously untapped advertisement and entertainment space is now available. To fill this space, Videowindow is looking to bring in commercial advertisers to help offset the cost of construction and installation. The company expects that within as little as a year the system can potentially pay for itself through the additional ad revenue and then becomes a profit generator.

However, in the eyes of the artist, it’s not simply about finances. That’s why Videowindow is looking to partner with sponsors like the Rijksmuseum and the Municipal Museum of The Hague, as well as the Willem de Kooning Academy of Art, to provide specially created artistic content for use on the screens. “We want to transition the monotony of long and boring waits for flights into memorable experiences that travelers can look forward to – art-vertisement, so to speak,” says Veenbrink.

A4 panel of pixels

While alternative solutions, like electrochromic ‘smart glass’, are continually developing larger panels to fit commercial windows, Videowindow has elected for a different approach: going smaller. The start-up’s innovative system is constructed by connecting small, fourteen-square millimeter pixels into larger modular panels. The modules are about the size of an A4 sheet of paper and they consist of liquid crystals and glass, which can be retrofitted to existing windows or embedded into double-pane glass before installation. The transparency of each pixel is controlled through electrical currents, much like television and computer screens.

By opting for these smaller pixels that can be connected, the entire system is modular and scalable to fit the size of virtually any glass façade. The technology behind the system is like that of thin-film transistors, in which each transistor is marked and ‘knows’ its position – they have an identity, so to speak. By utilizing specialized software and algorithms, the small pixels can refresh at 60 frames per second, which is good enough for streaming video. To keep all the individual pixels clocked and working together, the modules are controlled by a master control unit and subsequent sender boxes. These boxes help prevent lagging and ‘screen crawl’ that can occur as the signal travels over longer distances, thus keeping each of the pixels and modules in perfect synchronization.

Aside from the content, the Videowindow solution is also equipped with an array of light sensors to automatically adjust glare control throughout the day. With the ability to shade within full grayscale, the system can operate in a gradual manner – very different compared to other solutions like electrochromic glass or exterior blinds and shades, which are simply on or off. This means that even with wind speeds over 5 Beaufort (29-38 kmh), which prevents Schiphol Airport from lowering the outdoor blinds on an average of 151 days a year, Videowindow can transition from almost completely transparent up to 99 percent black to shade the incoming light.

Because the system operates directly on the windows, it’s exposed to unfavorable amounts of heat from infrared waves and the destructive properties of ultraviolet waves coming from the sun. The components are all military grade and can stand 105 degrees Celsius over a prolonged period of time. The modules can safely operate at 85 degrees Celsius, though this will never occur. To be prepared for the worst, the system automatically alters the deepness of the black levels over position and time when it theoretically would overheat. “At that point, the sun would win,” Veenbrink quips.

However, when embedded into the glass, this shading solution can dissipate more than 82 percent of the heat back to the exterior air – which can save the airport big when it comes to reducing the need for air conditioning and indoor climate control. According to Veenbrink, “When it’s 40 degrees outside and the screen is at a constant full black, the modules can potentially heat up as much as 40 degrees, to a total of 80 degrees. This difference between the outside air and the inside temperature will then dissipate the heat back through the glass and into the outside air through the physics of convection – effectively lowering the system’s temperature, which has never been recorded over 55 degrees.”

The inspiration for the Videowindow system came while Veenbrink was on a trip to Paris. He visited the Arab World Institute, where he encountered vast glass façades covered with mechanically controlled light valves/apertures to create artistic effects. Due to mechanical wear and dust, most of the system was inoperative. Stimulated by these shutters, Veenbrink was left to wonder, what it would take to create electronically controlled light valves with no moving parts and very little maintenance.

After this, Veenbrink went back to his house and set up shop in his attic. This is where the artist, inventor and now CEO started soldering and working with breadboards, Arduinos and a Raspberry Pi to design the first working prototypes. In fact, the first proof of concept was a few small glass panels with wires going to each segment and a multicable controlled by an Arduino connected to his laptop. “Sometimes, I’m amazed that this all works. All our knowledge is self-taught and was gained through tactile learning,” says Veenbrink. “We know just enough to challenge existing beliefs and rock the status quo on how to approach further development.”

This lack of experience, however, hasn’t stifled their ability to develop within the realm of high tech. Better yet, it was not knowing how things are ‘supposed’ to work that has led them to go against the grain to find new solutions to old problems. Veenbrink: “I’ve been told by many experts that this could never work, but I’m stubborn and I’ve persevered and proven them wrong more than once.”

The next step for Videowindow is the process of product validation. The first commercial setup is about to come into operation at the temporary terminal of Rotterdam The Hague Airport, while the new terminal is being constructed. In the meantime, the guys from Videowindow are looking ahead and planning how to implement a much larger version of the system into the newly renovated airport, as well as how to further develop and innovate as they consider new locations and markets for future deployments. 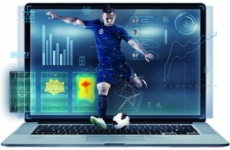