The search for a molecular transistor has yielded a promising new candidate.

It may be the ultimate goal of miniaturizing integrated circuits: having single molecules act as electronic nanocomponents. Recently, we’ve seen US company Roswell Biotechnologies integrating molecular sensors into standard CMOS. Now, researchers at Lund University in Sweden have come up with a new single-molecule transistor candidate.

Like the classical transistor, the molecular switch responds to electric potential, alternating between an insulating and a conductive state. This change in electrical conductivity is accompanied by a change in shape: in its natural form, the molecule is tub-shaped and insulating, but after absorbing electrons, it turns flat and conductive. So, technically, it’s an electromechanical switch.

To understand this behavior, we need to understand aromaticity. In organic chemistry, aromaticity arises in certain cyclic molecules in which the atoms are connected by alternating single and double bonds. For example, the most common aromatic compound, benzene, consists of six carbon atoms arranged in a hexagon, each holding on to its two neighbors with one single and one double bond.

If we number the atoms 1 through 6, the double bonds could connect atoms 1 and 2, 3 and 4 and 5 and 6. Or atoms 2 and 3, 4 and 5 and 6 and 1. In reality, benzene rapidly alternates between these two structures, to the point that it exists as an average of the two. Another way to think about it is to imagine benzene as being connected by six single bonds, and the remaining ‘double bond electrons’ being spread out over the entire molecule.

These delocalized electrons, as they’re called, confer a stabilizing effect. Indeed, benzene and other aromatic molecules are much more resistant to chemical alteration than is to be expected. This is a direct result of the fight that the molecule’s energetically favorable electron system puts up when something tries to break it up. Additionally, benzene, unlike its counterpart without any double bonds, is flat. This is a consequence of delocalized electrons working to maximize the overlap between their orbits.

Antiaromatic molecules look a lot like their aromatic counterparts, on paper at least, but don’t have enough electron pairs to spread out evenly across the backbone. This has a profound destabilizing effect. Often, antiaromatic molecules will deform in an attempt to break up the energetically unfavorable electron system. Case in point: benzene’s cousin consisting of eight carbon atoms is tub-shaped.

This cyclic 8-carbon molecule, known as [8]annulene, is a smart choice as a molecular switch for two reasons. First, thanks to out-of-plane deformation, [8]annulene manages to escape antiaromaticity, meaning it’s not particularly unstable. Secondly, it only lacks a single electron pair to become aromatic. As soon as it receives two additional electrons, [8]annulene snaps into a flat aromatic – and conductive – configuration.

The Lund researchers aren’t the first to realize the potential of [8]annulene for molecular electronics, molecular machines and other fancy nanotechnological stuff. Many research groups have tried their luck with it, with quite interesting results, but one thing stood out: it has proven difficult to find [8]annulene-like molecules that can switch back and forth between the flat and tub-like shape indefinitely, or at least for an appreciable number of cycles.

This is where the Swedes succeeded. They linked together [8]annulene derivatives to obtain larger structures, which reversibly accepted and donated electrons while changing shape and conductivity. Furthermore, the links between the active cores may serve as suitable ‘handles’ to anchor the switches to surfaces – which will be essential for integration in CMOS or some futuristic type of circuitry.

“We anticipate that the presented structures will inspire new entries to shape-shifting materials and provide a leap towards the intriguing possibility of implementation of [8]annulenes as single-molecule logical gates. Such work is ongoing within our laboratories and will be reported in due course,” the Lund researchers conclude their paper. 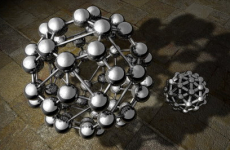 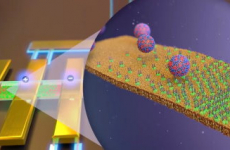 The University of Twente has established the Molecules Center. Part of the Mesa+ Institute, this center of expertise aims to… 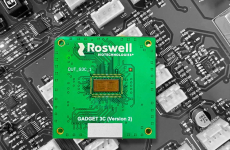 The US company Roswell Biotechnologies has wired single molecules into standard CMOS circuitry, creating what it calls the world’s first…