The industrialization of EUV lithography began in 1997, but it wasn’t until after the turn of the century that ASML definitively threw its hat into the ring.

By the early 1990s, several research groups had conclusively demonstrated that EUV light was suitable for burning images into a resist. But those images weren’t razor-sharp. The next question was: what resolution can you achieve using EUV? And what are all the stops you’ll have to pull out to get there?

In the Netherlands, Fred Bijkerk continued his research, but the Americans were the first to get a large, organized effort underway. In 1994 Lawrence Livermore National Laboratory, Lawrence Berkeley National Laboratory, Sandia National Laboratories and Bell Labs started the US National EUV Lithography Program, funded by the Department of Energy. At the helm stood an expat Dutchman: Frits Zernike Jr, son of the Nobel Prize winner. Frits Sr derived mathematical equations for lens aberrations that every lithographer dreams of.

Under the banner of the national lithography program, the first primitive tools were developed, with more than one mirror (which increased the size of the exposure field), a moving stage capable of achieving a reasonable overlay (the degree to which sequential exposures are aligned), and an alignment system – all of them must-have elements in an industrial machine. But though in 1996 the first MOS chips were made using EUV exposures, people began to realize how difficult it would be to make EUV optics good enough to project chip images.

When the US Congress started cutting programs at national laboratories a few years later, EUV research was in danger of grinding to a halt. Only by coughing up its own money was Intel able to preserve the momentum that had been built. Without the company’s bridge financing, the researchers involved would have fanned out over other projects, and their cumulative knowledge would most likely have been diluted.

In 1997 the processor giant teamed up with other semiconductor manufacturers to found the EUV Limited Liability Company (EUV LCC). In this ‘virtual company’, the same national laboratories conducted the research, but now working with – and substantially funded by – industry, including tool suppliers ASML and SVG in America, bought by ASML in 2001. That was the starting gun for the industrialization of EUV lithography.

At that time, however, it was far from evident that EUV would even make it to a production-ready technology. ArF lithography (wavelength: 193 nanometres) might have been ready to take up the baton from KrF litho (wavelength: 248 nm), but it was generally assumed that ArF would only last for a few nodes. The 193-nm laser would probably be sufficient for 90-nm chips, but something new would have to come along for the 65-nm and 45-nm nodes. What exactly that would be, no one could say.

‘There were three potential candidates at the time: EUV, e-beam and ion beam lithography,’ says Luc Van den hove, now the CEO of Imec and then head of the company’s lithography group. ‘Every technology had its own proponents and opponents, but the industry had to choose. To create greater clarity and consensus, Sematech organized two workshops a year where the latest developments and insights were shared. We need to take the decision of the century, we were told there.’ At the end of the workshop, participants voted to identify the most appealing candidate, categorized by node.

No decision was taken during that series of workshops, but they did help to clarify a number of things, says Jos Benschop, head of technology at ASML and a steady attendee at the meetings. His company didn’t write off any of the options a priori: it began exploratory projects with partners for EUV, e-beam and ion beam lithography.

ASML partnered with Applied Materials to create the joint venture Elith, which would commercialize Bell Labs’ e-beam technology. IBM also had an e-beam project, but in a slightly different implementation. ‘Both Bell Labs and IBM were quite advanced, but Bell Labs was open to collaboration, so we went with them,’ Benschop explains. For ion beams, ASML worked with IMS in Austria; for EUV, with Zeiss, Philips Research, Philips CFT, TNO and Oxford Instruments.

A few years later a fourth option arose: deep ultraviolet lithography at 157 nanometres. ‘That was another evolutionary jump in wavelength, just as the industry had made before,’ Benschop says. ‘And there was a good laser for it. We initially thought that one of the three disruptive options would succeed ArF litho, but we adopted 157 nanometres as an interim solution. With the idea that one of the other three technologies would be adopted after that.’

At the first Sematech workshops in 1997, EUV consistently ended up last in the voting. Not surprising, since the technology had barely left the proof-of-concept stage at that point. Shortly after the turn of the century, however, the scepticism transformed into faith. In 2001, EUV was ranked as the most promising next-generation lithography variant, and that was also the moment when ASML definitively decided to throw its weight behind EUV.

The shift had a number of reasons. First of all, in 2001 EUV LLC delivered the Engineering Test Stand, the first prototype EUV scanner that could serve as a model for future production scanners. The device could print 70-nanometre line patterns – beyond the assumed limit for ArF lithography. That made an impression.

Second, ASML and others ran up against a fundamental physical limit in e-beam and ion beam lithography. ‘To achieve higher resolution, you have to bring ions and electrons closer together,’ says Van den hove. ‘But these particles repel one another. So you have to reduce the current as you increase the resolution, and that hampers the throughput. We had to acknowledge that the throughput of e-beam and ion beam would decrease in every subsequent generation.’

Benschop adds: ‘Whatever else happened, we wanted a solution that would last for several generations, and EUV was the only technology that satisfied that criterion. What’s more, it was the best fit for our competencies, but that was never the deciding factor. We would always have chosen the technology that was best for the industry.’

So ASML put e-beam and ion beam aside, but 157-nm development continued for some time. The technology was never used in production because UV light at that wavelength requires a special lens material (calcium fluoride), which no one had much experience with. It turned out to be exceptionally difficult to manufacture usable lenses with low or no birefringence.

And there was another development that made 157 nm litho essentially superfluous. By replacing the air between the lens and the wafer with water, industry was able to extend the lifetime of ArF technology: the smallest structure that could be imaged with 193-nm light dropped from 60 to 38 nanometres using immersion lithography. Chip manufacturers could still take a relatively evolutionary step before they needed EUV, but they would ultimately end up having to use immersion much longer than they would have liked. 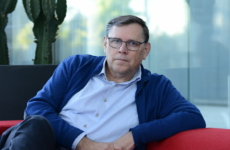 A new technique leverages the properties of common table sugar to transfer lithographic patterns onto the most complex of surfaces.