A new printing technique developed at TNO’s Holst Centre could be a godsend for chip and electronics assembly and display manufacturing.

Once the paste is smeared in the grooves of the plate, a short but violent pulse of current is sent through electrical wires within. Like in a toaster, the wires produce heat, but that’s where the comparison ends. So violent is the surge of current that, for a fraction of a second, the heat flux becomes over ten times bigger than on the surface of the sun. Almost instantaneously, a bit of solvent at the interface of the paste and plate evaporates. Pressure builds up at lightning speed, resulting in an explosion that blasts the paste from the plate – the acceleration is over a million g. A moment later, the ‘ink’ lands on the substrate, in exactly the same pattern defined by the grooves.

This is how impulse printing works, an invention of TNO researchers at Holst Centre in Eindhoven. Like lithography, this new technique can transfer fine-grained patterns in the micro to millimeter range, but its price tag and throughput are similar to conventional printing methods. Moreover, impulse printing can handle complex 3D structures on the substrate just fine – the paste conforms to surface topology and can even bridge gaps.

Such properties are worth their weight in gold in, for example, the assembly of electronics (applying solder balls) and the packaging of chips (manufacturing interconnects). In both fields, more and more components are being combined in increasingly complex, increasingly tightly packed assemblies. Electrically connecting these components is challenging, to say the least. Printing such complex patterns fits impulse printing like a glove.

Display fabrication is another nice potential application, particularly the manufacturing of emerging microLED displays. These consist of a matrix of microscopic LEDs, each forming a pixel. Impulse printing can be used to print the millions of droplets of conductive substance that electrically connects the LEDs to the substrate. The technique can even help apply the electrical contacts between the front and back of the screen by shooting the paste onto the edges of the screen (the backside contains the LED drivers). The viscous ink then spontaneously folds around it (see video below).

Holst Centre is setting up a startup called Fonontech to industrialize the technology. Completion of a beta tool is scheduled for the end of next year, followed by the development and construction of an industrial high-throughput machine. The goal is to build printing equipment that patterns surfaces of up to 20 by 20 centimeters in a single pass.

How long have you been working on this topic?

Hendriks: “We started at Holst Centre in 2013. We used high-power flashlights to launch the ink from flat surfaces, but this method proved to be of little added value compared to existing techniques. Then I came up with the idea of applying the ink in grooves treated with light-absorbing coatings. I worked on that concept for a number of years in the United States, at a company specializing in conductive inks and flashlights among other places. Eventually, I concluded that electricity is a better energy source than light. It’s fitting to work on that here in Eindhoven since our heaters are basically a kind of flat light bulb.”

What are the advantages of impulse printing?

“It can be used to print more accurately and with higher resolution than existing printing technologies, at higher speed and a low cost of ownership. Because the ink doesn’t experience any shear forces, it can be used to print highly viscous pastes – more viscous than other printing technologies can handle. This property makes it possible for the ink to conform to 3D structures on the substrate. I think that’s what makes impulse printing unique. Lithography only works on flat surfaces and 3D dispensing is quite slow.”

Is there anything special about the ink?

“No, we can print all standard inks. In fact, we’ve had plenty of companies come over and bring their own ink and substrate. We had never worked with those before, but once we know the boiling point of the solvent, we can print it. Even compounds without solvent, such as epoxy adhesives, can be printed. Obviously, demonstrations like that make an impression.”

How do you align the heater and substrate?

“In our alpha tool, we use a camera, a robotic arm and substrates with alignment markers. We do a test print and adjust the positioning to align properly. This way, we can position with an accuracy of better than 10 microns. For the industrial tool, we’re going to employ very accurate and fast XYZ stages – six degrees of freedom because the distance between substrate and plate is also a variable.”

What’s on the agenda for the near future?

“We’re now in TNO’s Tech Transfer Project, which should lead to the creation of a startup to scale up this technology. We hope to do that as soon as possible. Discussions are already underway with five potential investors. In addition, we’ll continue to create awareness about impulse printing in industry and the investment community, by visiting trade fairs and giving demonstrations.” 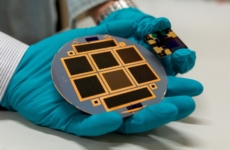