Start-up Leydenjar is setting up a pilot production line in Eindhoven to prove its high-capacity battery anodes made from nano-textured silicon can be made not just in labs but in factories as well.

Asked to look back at 3.5 years of developing a new anode recipe for lithium-ion batteries, Christian Rood of Leydenjar prefers to answer what outsiders have told him. “Experts and people from the battery industry say we should be happy with the progress we’ve made. Personally, I would have liked to have seen a little more. I guess I’m not easily satisfied,” the company co-founder admits. In any case, it’s fair to say: so far, so good.

Leydenjar, named after the battery’s predecessor, thanks its existence to technology that was developed many years ago at solar cell research institute ECN. Researcher Wim Soppe theorized that nano-texturing would improve the performance of thin-film silicon solar cells. He then successfully developed a plasma-enhanced chemical vapor deposition (PECVD) process to create a layer of silicon nano-pillars on a substrate. Unfortunately, they didn’t perform as well as hoped.

The technology was shelved and almost forgotten until Soppe learned that silicon is a superior host for lithium ions, yet fails miserably as a battery anode because it can’t handle the mechanical stress associated with repeatedly taking in and letting go of guests. The porous structure of pillared silicon might be able to handle that, Soppe figured. This time, he was onto something. In fact, the lithium-loading capacity of his silicon approaches the theoretical limit, without getting damaged by loading and unloading lithium.

Fast forward to today, Leydenjar is gearing up to prove its technology can be mass-produced. The ultimate goal: making anodes for lithium-ion batteries that outperform the traditional graphite ones, without adding cost.

Between the initial lab experiments and looking into manufacturing, a lot of work has been done. One important obstacle was layer thickness. “For proof-of-principle experiments, 200 nanometer is fine, but as an anode in a commercial battery, it needs to be 50 times thicker. Otherwise, it wouldn’t be able to generate a high enough capacity per area,” Rood explains.

Another delicate task was selecting the battery’s electrolyte. Rood: “In a battery, a solid electrolyte interface is formed on the electrodes after a short period of operation. This film’s characteristics depend on the electrolyte and can affect battery performance substantially. We needed to find a good match for our anode.”

Leydenjar successfully increased layer thickness and identified a proper electrolyte, allowing the company to pair the anode with a suitable cathode and start building actual batteries. Their prototype promptly won the BMW Start-up Challenge, providing Leydenjar with an opportunity to present their technology to key executives and developers of the car manufacturer.

“It got us quite a lot of exposure as well. We received calls from various battery and car companies,” says Rood. That kind of attention is a big help when trying to round up additional funding, which Leydenjar secured in March 2018. “This money we used to optimize the energy density of the anode. Our silicon has tenfold the capacity compared to graphite, leading to a 50 percent higher energy density in the battery.”

“We also started working on our production process, because we won’t be selling batteries but rather the manufacturing equipment for our anodes – along with know-how, of course. Our PECVD tools need to seamlessly fit into existing production infrastructure without adding cost.” Both these items have been ticked off from Leydenjar’s list.

Next up is proving all this still holds at actual production volumes. “This is why we’re setting up a roll-to-roll pilot production line in Eindhoven now (the anodes use copper foil as a substrate, PvG). In addition, this will allow us to engage with potential customers and partners on a larger scale. In fact, we’re already working with an OEM and battery manufacturer to develop prototype battery cells.”

Apart from the pilot line, Leydenjar is also setting up its own battery lab in Leiden, which will develop battery recipes tailored to different applications. Initially, the start-up targets specialized niche markets, after which it will work its way up to consumer products, to ultimately penetrate the holy grail of battery markets: automotive. Each successive application is more demanding, eg pertaining to battery life.

“We aim to ship our first fully optimized modules to customers in 2021,” states Rood. Will Leydenjar still be a company on its own by then? “I expect we’ll have partnered up with a company in the battery industry. We’re becoming a better buy with every step we take, so sooner or later, an offer should present itself.” 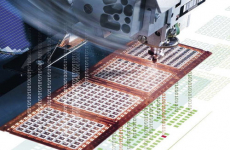 Thanks to booming mobile end-markets, BE Semiconductor (Besi) reported a solid third quarter. The equipment maker based in Duiven saw… 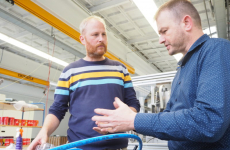