The Institutes Organization of the Netherlands Organization for Scientific Research (NWO-I) has a new leader. The board has selected Miriam Luizink to serve as the organization’s new director, effective 1 October 2020. In her role, Luizink will oversee the directors of the nine Dutch research institutes, such as Amolf (atomic and molecular physics), Nikhef (subatomic physics) and Astron (radio astronomy), among others. She also will be responsible for the scientific positioning of NWO-I’s portfolio, in addition to serving as the organization’s public figurehead.

Luizink will be taking the reins for the first time since the NWO executive board voted in 2019 to change the governance model of NWO-I, to promote more effective and decisive action through the creation of the new position. Previously, she held a range of positions within the Dutch scientific community, ranging from the director of the Mesa+ Institute for Nanotechnology at the University of Twente to a supervisory board member for NWO’s space research organization SRON.

The University of Twente has selected Tom Veldkamp to serve as the next Rector Magnificus of its supervisory board. He’ll… 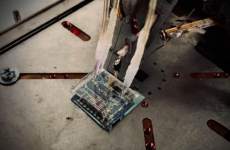 Scientists of Eindhoven University of Technology (TUE), together with American and Italian researchers from Stanford University and Italian Institute of…