With the in-house built PMP platform, Prodrive Technologies has succeeded in its efforts to make sure software development is no longer a bottleneck. By modeling and analyzing at an early stage, the dynamic behavior of the physical system can be predicted very accurately. Various industrial parties have already recognized the advantages of PMP and are using it for their own motion applications.

A leap of faith, that’s how Ralph Stassen describes the step Prodrive Technologies took a few years ago in its development strategy. “We started out as an electronics specialist,” recalls the Motion & Mechatronics program manager at the Eindhoven-based company. “We added custom software and we’ve also been doing custom drives and mechatronics for some time now.” Within Stassen’s group, half of the turnover currently comes from the development of specialized mechatronic systems.

Prodrive is very technology-driven by nature. That sounds good, but it has a downside as well. Stassen explains: “Customers come to us with a problem and we try to solve it with the technical capabilities we have in-house.” That much customization means Prodrive had to build up very specific knowledge. So specific, in fact, that it pushed itself into a niche. “Four years ago, we started building up our own IP. We’ve invested heavily in a catalog full of off-the-shelf products. After all, with a good collection of standard drives and motors, we can develop and deliver mechatronic systems much easier and faster. We still do custom work, but since most of the building blocks are already available, we can move more quickly.”

To keep up the high development pace, Prodrive also had to make its software designers work more efficiently. “In the seventeen years that I’ve been working here, we’ve set up several motion applications,” says Maik van Kranenburg, a software engineer at Prodrive. “These were always iterations of existing software, but about seven years ago, we concluded that it was too difficult to maintain. That’s when we started to build a new platform so we could easily configure our software. Based on a hardware model and with input about which sensors and actuators are to be included in the system, we can now start developing software via the Prodrive Motion Platform before a physical design is built. Today, we’re really reaping the benefits. Previously, the pressure might have been on the software, but now, with PMP, it has shifted back to the firmware and hardware. The platform enables us to have the software up and running in no time.”

Although PMP was originally designed to make internal software development more efficient, Prodrive quickly saw that its clientele could also benefit from the tool. Therefore, it didn’t set up PMP under the radar but invited a number of its largest customers. “It was quite nerve-racking to ask them all for input at the same time in one big meeting,” admits Stassen, “but it was very much appreciated. We asked them how we should design the software, which functionalities are important and let them participate in the decision-making process on the roadmap. This way, we’re working on a generic platform that precisely matches the wishes of our high-tech customers. It’s an ongoing process in which we still meet regularly to make adjustments.”

Van Kranenburg gives an example: “One of the requests was about data acquisition. Initially, you could start and stop it manually, but there was a need to be able to base it on triggers. If a certain value gets too high, you want to record all signals one second before and one second after. We made a proposal and discussed where there was room for improvement. This is how we create a platform that’s interesting for everyone.”

It turns out that the wishes of all users, both internal and external, show considerable overlap. “With highly software-driven engineering groups, the differences can be overcome quite well,” says Stassen. “Those engineers want to start from scratch with as much freedom as possible so that they can build the most efficient system. We offer that openness with PMP. On the other side of the table are the mechatronic engineers who just want to control their engines and don’t want to program at all. They’re looking for a practical interface with which they can conveniently tune their drives. This is also possible with PMP, partly because we integrate with Matlab and Simulink. Through a toolbox and PMP, you can upload the models you make in those tools into the controllers of your system.”

Van Kranenburg adds: “We used to sit around the table with a customer to discuss the model, after which we would implement it manually. When the customer would then integrate it into his system, he would sometimes run into problems and we had to come over to solve the issues together. At that time, we didn’t have a model that sufficiently corresponded with reality so that we could develop and test our software against it.” PMP put an end to the separate models for the mechanics and the software. “A customer can model his system himself in Simulink, turn it into a library and upload it. We no longer have to interfere, thus immediately avoiding IP discussions. A customer can do his own thing and no longer has to tell us the details of his machine. You can also simulate in Simulink, in PMP and on the final hardware. By comparing the results, you can significantly shorten the iteration time.”

PMP has been mature for a few years now. Multiple Prodrive customers are already using the tool internally. The Eindhoven-based company isn’t allowed to disclose much about these projects, but it can go into some detail about the development process for a manufacturer of PCB production equipment. Prodrive designs and builds all the mechanics for that client, which it delivers turnkey. The customer only needs to add his own application module on top.

“We started with a clean sheet and the customer’s requirements,” describes Prodrive system architect Milan van den Muyzenberg. “Some features of the machine are crucial to the customer. For example, the settling behavior determines how successful the system will be in the market. You want to secure these kinds of things in advance. We immediately started with a model in PMP so that we could properly analyze the system. In such a model, you can inject interference forces and see what influence they have on the dynamic behavior. You can also assess the stiffness by checking that the eigenfrequencies are what they should be. This knowledge can then be linked back to the properties that are relevant to the customer. As this is all done virtually, you can iterate very quickly, internally and also with the customer.”

With PMP, Prodrive engineers can build, compile and run the necessary models. “You can simulate in Simulink and load the resulting code into our simulator,” explains Van Kranenburg. “This way, we can already perform the machine’s critical movements in a virtual setting. We can test the dynamic behavior in PMP and compare it with the customer’s model.”

“It’s a close collaboration between the control engineer and the mechanical engineer,” Van den Muyzenberg continues. “Together, they ensure that the system behaves as intended. As the process evolves and we have more hardware available, we can test the software developed on the real hardware. We’re currently still in the phase of deploying the models on a PC, but we can switch almost seamlessly. After all, we use the same tooling and software that will later run on the actual system.”

Prodrive has provided a simplified model of the mechanics to the customer. “They are, of course, more interested in the core of their machine than in the mechanical behavior,” notes Van den Muyzenberg. “But in the end, everything has to be integrated. The model allows them to assemble and test their entire system at an early stage.”

Where can PMP still be improved? “We’re already very close to first time right,” states Van den Muyzenberg. “The mechanics match the model so well that we don’t expect any problems in machine dynamics. Because we’re talking about expensive, complex parts with very long lead times, your first shot must be right. Modeling in PMP has helped us enormously.”

Stassen: “The platform’s user-friendliness can be improved a bit further. We’re working on making PMP even more accessible so that you don’t have to be a software engineer to get the most out of it. We’re targeting the high-end market where the wishes and requirements are very challenging. We need to improve constantly to be able to keep up and stay ahead.” 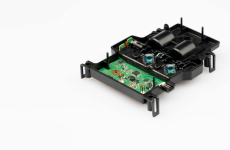