Samsung Electronics thinks it can close the gap with TSMC in logic manufacturing. A senior executive told attendees of a private event that the Korean company’s foundry division will be churning out 3nm chips in 2022, Bloomberg reports. After initiating risk production in 2021, TSMC is aiming to move into 3nm volume production in the second half of 2022.

Part of Samsung’s strategy to match, or overtake, TSMC is the adoption of gate-all-around transistors at 3nm. Surrounding the channel on all sides with gate material has a number of advantages, among which better gate controllability and reduced leakage current. TSMC has opted to keep using FinFETs at 3nm. 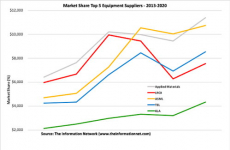 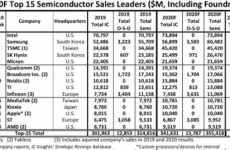 Chip industry to grow 6 percent, top 15 by twice as much

The semiconductor industry has proved remarkably resilient in this coronavirus-plagued year. IC Insights is expecting the industry to grow by…

Grai Matter Labs (GML) has announced its latest financing round of 14 million dollars. The round was led by the…