Fingerprint sensor developer Touch Biometrix has announced it will be partnering with Delft’s IC design house SystematIC as it aims to get its first product to market by Q4 2021. Founded in 2018, the Eindhoven-based company is a fabless developer of a range of capacitive fingerprint sensors called TCAP (transistor capacitance) that are manufactured using thin-film transistors (TFTs) on glass or plastic. The startup’s first commercially available product will be a large-area FAP 60 sensor to replace bulky optical sensors. The 500 PPI 3D image sensors will have a thin form factor as well as a significantly lower cost of ownership compared to existing optical technologies.

“Although the volume for FAP 60 sensors isn’t as high as for other sized sensors, this is an ideal entry point for us as there’s currently a big demand for a slim form factor, high-performance FAP 60 sensor. We expect the first samples to come off our production partner’s lines in Asia in November this year and we’re very excited about issuing these samples to our customer pipeline,” says Touch Biometrix’s CEO Mike Cowin. “In parallel, we’re also working on a solution for full-screen finger-on-display sensors for smartphones. This is a solution to the current challenge that’s widely viewed as the fingerprint sensor ‘holy grail’ for smartphone applications to replace localized ultrasonic or optical in-display sensors. The demand for test samples is truly significant, with routine requests for quotes in the tens of millions.” 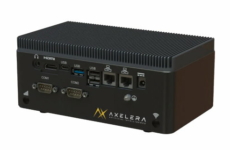