Enschede-based pulsed laser deposition (PLD) equipment manufacturer Solmates has been quietly acquired by US multinational Lam Research. Although neither company has issued a press release, Solmates’ company website states that “Solmates and Lam Research have joined forces, combining Solmates’ enabling PLD technology with Lam’s enabling semiconductor production equipment. This synergy will enable our mission to bring the unique benefits of PLD to the volume production market. Solmates remains as an organization within Lam Research.” The deal was entered into the Dutch merger and acquisition database M&A on 7 February this year.

In PLD, a material is shot with a laser pulse, creating a ‘plume’ of plasma that subsequently deposits on a substrate as an extremely thin film. By shooting different targets in a specific order, materials made-to-order can be created layer by layer. Originally, PLD could cover only small surfaces, but over the years, Solmates has extended coverage to 300-millimeter wafers. Target markets include MEMS, solar, batteries and photonics.

IC Insights has adjusted its 2022 worldwide semiconductor capital-spending forecast, which now shows a 21 percent increase this year to… 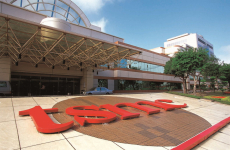 Not costs or the arduous concurrent development of EUV lithography killed the 450-millimeter project, but competitive considerations.