Cees Links is a Wi-Fi pioneer and the founder and CEO of Greenpeak Technologies and currently General Manager of Qorvo’s Wireless Connectivity business unit.

The pandemic has more people working from home, and this has accelerated the adoption of Wi-Fi 6. Consumers are upgrading home networks with this new, higher-speed standard and they’re enjoying the additional key benefits of its distributed architecture – ease of setup and high capacity that serves the needs of all family members – from video conferencing in the home office, to binge watching a favorite show in the living room, to hours of online gaming in an upstairs bedroom.

Wi-Fi 6’s distributed architecture brings a router and a set of satellites, or “pods,” which can be strategically positioned in the home. These pods connect themselves automatically to the main router, the one that connects to the outdoor internet, via a protocol called Wi-Fi Easymesh. The result is high-speed Wi-Fi through the whole house. Gone are the days when proximity to the router is crucial for performance and repeaters and/or powerline adapters are needed to cover the dead zones.

Although the term “pod” sounds rather simple, it could be a quite sophisticated device that can simultaneously do many other things. In fact, every non-mobile Wi-Fi device could function as a pod. A TV, a wireless speaker or smart assistants like Amazon’s Echo Dot or Google Home can simultaneously execute their own function and serve as a pod for other Wi-Fi devices. This is all on the drawing boards.

Consumers are waiting for one overarching concept

For a truly smart home, however, there’s another hurdle to overcome. Today, the IoT is serviced by multiple competing standards, representing different ecosystems, including Zigbee, BLE, Thread, Apple Homekit, Samsung’s Smart Things and Google’s Nest. This fragmentation has kept the IoT from living up to its potential as consumers wait for one overarching concept. Without one, the smart home is just a set of incoherent, stand-alone, special-purpose applications, unable to use each other’s data or availability.

The good news is called Connected Home over the Internet Protocol (CHIP). It’s more like a new aggregation standard than a new networking standard. Essentially, CHIP brings together the existing IoT standards. It’s a cooperation of the Zigbee Alliance and the Thread Alliance with Amazon, Apple, Google and Samsung, aggregating Zigbee, Thread, Bluetooth and Wi-Fi in one overarching standard.

CHIP will enable end-devices, the “things” of the IoT, to talk to the “pods” of the Wi-Fi 6 network – and via these pods, to the internet. The sensor end-node data can go where needed. This concept makes Wi-Fi 6 and CHIP an ideal couple for indoor connectivity.

Each Wi-Fi 6 pod will be equipped with a Zigbee radio, or better yet, a standard IEEE 802.15.4 (IoT) radio, next to the Wi-Fi radio. This allows all smart home devices (motion sensors, temperature sensors, open/close sensors) to connect to the Wi-Fi network and to the internet. With the popularity of Wi-Fi connectivity, there are already pods in many homes. Extending these with an IoT radio makes a lot of sense, and Wi-Fi 6 Easymesh automatically takes care of the rest. Some Wi-Fi router companies are already including CHIP radios (IEEE 802.15.4) in their products. This configuration will go mainstream when CHIP is formally announced.

So where does this leave Bluetooth and BLE Mesh? That has yet to be seen. One could argue that Wi-Fi pods can just as easily be equipped with a BLE radio instead of an 802.15.4 radio. While that’s technically true, it’s not the most practical solution because Bluetooth itself is more a connectivity technology than for networking.

Look for an explosion of CHIP devices for Wi-Fi 6 on the market. In the perception of the consumer, everything in the home will be “Wi-Fi connected.” This will happen through Wi-Fi 6 Easymesh, and end-devices will talk to the Wi-Fi 6 network directly through a Wi-Fi radio (those end-devices with a keyboard and a screen) or via a smartphone setup and an IEEE 802.15.4 radio. 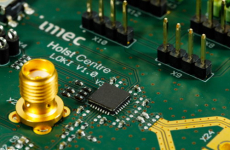 Imec has announced it has reached a new milestone in its UWB chip development. The Belgian nanoelectronics leader revealed the… 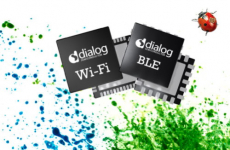 UK’s Dialog Semiconductor looks to have found a new home in Asia. Japan’s Renesas Electronics has put in an all-cash…

Wi-Fi 6E: the new kid on the block

The Wi-Fi 6 standard runs in the so-called unlicensed, low-power 2.4 GHz and 5 GHz frequency bands. These bands have… 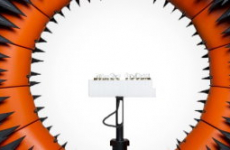