The corona pandemic has prompted hiccups in the supply chain, as well as operational difficulties, but so far ASML has managed to keep things going. Customers keep ordering enthusiastically as well, so the company remains cautiously optimistic despite the uncertainty ahead.

Looking at ASML’s stock price, you wouldn’t think a global pandemic is casting dark shadows over the world economy. After a brief nosedive mid-March, the company’s shares have recovered to pre-corona levels. Even dropping formal financial guidance for the remainder of the year didn’t scare off investors. All this is unusual because the semiconductor industry is historically the first to get hit whenever economic prospects sink.

Reassuring words from CEO Peter Wennink probably helped. “We’re not planning for an Armageddon scenario, where the entire world economy crumbles into an abyss, we’re not planning that. I don’t think it’s got to happen,” Wennink said while discussing first-quarter results with financial analysts.

The fact that ASML has so far experienced no serious disruptions also inspires confidence. Travel restrictions and quarantine measures might wreak havoc on a company that relies on a multi-tiered supply chain that spans the entire globe, yet so far only a limited number of shipments have been delayed. Several of ASML’s suppliers have been forced to temporarily cease operations, but so far either an alternative supplier or a workaround was found. All in all, “I think we can say that the issues that did pop up around the closure have been resolved,” stated CFO Roger Dassen in a video message.

In ASML’s own operations, there have been “inconveniences” and “inefficiencies” too, admitted Dassen. With proper safety measures in place, all of the company’s facilities are operational, but serving customers in the usual way is much more challenging. For sure, shipment installations and field upgrades are affected when crossing borders is, at the very least, a hassle.

But with a lot of creativity, resilience and dedication, ASML has been able to serve its customers satisfactorily, said Dassen, thanking his engineers for their dedication. “They go above and beyond what can be expected from them in these circumstances. You have to recognize that, for instance, an engineer traveling to a certain location, upon arrival has to go into quarantine for a certain period – and sometimes upon return has to go into quarantine again. So, there’s a ‘double whammy’ in terms of quarantine there. Despite that, people are just completely dedicated to go,” said Dassen. Additionally, ASML has been experimenting with “virtual, augmented-reality-type” technologies to support local teams.

Investors also know that the semiconductor industry is constantly chasing a moving target and won’t easily step on the brakes. To keep going they need ASML’s EUV technology – badly. “Leading-edge customers have told us that they see an unabated demand for leading-edge devices at least throughout this year. Keep in mind the lead time and the qualification of lithography systems are the longest in the fab and customers won’t want to jeopardize any adjustment to their technology and capacity ramps that will negatively affect their ability to keep serving their leading-edge customers,” Wennink explained.

Recent mutations in ASML’s order book reflect this. Q1 bookings came in at 3.1 billion dollars, a sequential increase of 28 percent. About half of that amount was for EUV machines, filling up slots for ASML’s planned EUV production capacity of 45-50 units next year (versus 35 this year). Some customers are getting so nervous about having their EUV tools delayed that they’re now asking to have them shipped before normal factory acceptance tests have been completed.

Clearly, the only company in the world capable of delivering technology of such a highly strategic nature isn’t going to crash and burn. 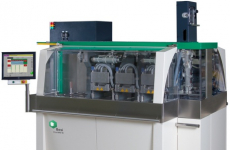 After a stronger-than-anticpated Q1 2020 result, BE Semiconductor Industries (Besi) crushed its Q2 expectations of 5-25 percent growth. The Duiven-based…